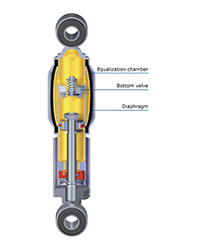 The STAB-O-SHOC TA series from Stabilus was originally developed as steering dampers. But due to their flexibility and ruggedness, these dampers have proven themselves as reliable partners outside of vehicle construction wherever vibrations had to be reduced and safely dampened. The diaphragm against the outside of the pressure tube can easily absorb the additional piston rod volume, resulting in slip-free force transmission in any mounting orientation. Due to the special piston system with valve plates, the damping forces can be set variably and virtually independently of each other.
The TA20 is the standard version of this damper, which has a proven track record in numerous applications. The TA30 and TA40 variants are special designs, which will be customized for higher loads according to your requests after consultation with our product developers.